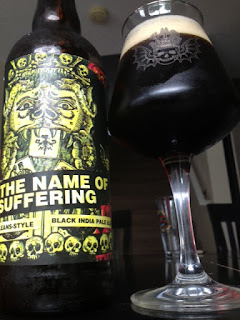 I'm freaking terrible. I drink almost everything out of a pint glass, but as your resident beer geek I'm trying to get better.  I just started using snifters on my high ABV brews, so I don’t drink it as fast as a normal pint and the aroma is better on display. I have ordered a couple of the cool new IPA glasses, and now I have these Teku glasses. So much glassware is made for a specific brew, so as soon as I got the glasses I started doing research. I needed to know what I was supposed to drink out of this bad ass looking goblet.

An Italian brewer decided that the craft beer community needed a beer glass like the ISO wine glass that could be universally favorable to all styles of beer in official tastings. It may not be the best for every style individually, but it would be the best across the board. Teo Musso, the Italian brewer, called in a sensory expert named Kuaska,( TE + KU first two letters of both of their names) and they designed a glass that would be universally favorable to all styles of beer. It was released in 2006. Since it was designed by an Italian it is huge in Italian breweries and beer bars and is just taking roots here in the states.

They are offered here in the States by breweries like Three Floyds, the Lost Abbey and a few others. I just got two (my wife told me I am never allowed to buy just one glass, they should always be in a set) from a recent road trip up to Three Floyds.

I am in love with my glasses. They look great; classy but manly at the same time. Their stems are stronger than most wine glasses that we have and feel sturdier. This makes me happy because I don't feel like I am going to break it every time I grab it by the stem. The stem design makes it so the heat from your hand doesn't affect your brew, which allows you to keep your brew at the serving temperature longer. Most of us really don’t care about this… hell, I really don’t care about it, but for some higher ABV beers that you sit and sip on this can really help out. The shape of the bowl is similar to a snifter glass. It opens up allowing the aroma to pour out into your nose as the brew pours out into your mouth. This helps all your senses enjoy your brew at the same time.

All in, I love this glass. It’s functional and looks awesome. The Three Floyds logo totally seals the deal. Go grab a pair and see if you dig it as much as I do.